Bugatti and art have been inextricably linked for over 110 years. Rembrandt Bugatti, brother of the company founder Ettore, was regarded throughout his life as one of the most important and artistically most independent sculptors of the early 20th century. Today his works are shown in various collections and museums worldwide. For Ettore Bugatti, creating an automobile is an artistic process from the start. He passes this passion on to his son Jean. With success: Jean Bugatti designed some of the most elegant and timeless automobiles of all time with a keen sense of form. With the Bugatti Type 57 SC Atlantic, he creates what is today the most valuable and exclusive vehicle in the world. The Guggenheim Museum Bilbao now pays tribute to his work and offers a vehicle a large stage.

With its impressive titanium architecture, the Guggenheim Museum in Bilbao, northern Spain, is one of the most spectacular buildings in Europe. Known for its collection of modern and contemporary art, it now presents the exhibition “Motion. Cars, Art, Architecture”. Norman Foster, British star architect, curated the exhibition, thereby acknowledging the parallels between the automotive and art worlds. The exhibition includes around 40 original models of the most beautiful, exclusive and technically innovative creations of the automotive industry - including a Bugatti Type 57 SC Atlantic. The Type 57 SC Atlantic was selected for the exhibition's sculpture gallery because of its technical excellence and its unmistakable, flowing lines. This shows that the Bugatti engineers who shaped it were also artists in their own way. Presented in the exhibition's sculpture gallery, the Type 57 SC Atlantic stands out for its technical excellence and its striking, flowing lines. Appropriate: the coupé is parked right next to the sculpture "Running Panther" by Rembrandt Bugatti.

The Type 57 SC Atlantic on display at the Guggenheim Museum Bilbao is one of only two original vehicles left. The coupe is owned by the Mullin Automotive Museum in Oxnard, California. Bugatti originally manufactured it in 1936 for the British banker Victor Rothschild, chassis number 57 374. Fashion designer Ralph Lauren owns the fourth Atlantic built, chassis number 57 591. Jacques Holzschuh bought the third example in 1936. In 1955 the model with chassis number 57 473 had a serious accident and was almost completely destroyed. Although it was extensively restored using many original parts, many components had to be remanufactured.

Jean Bugatti initially used the second Type 57 SC Atlantic built with the chassis number 57 453 himself. Only he and occasionally selected friends, mostly racing drivers of the company, were allowed to get behind the steering wheel of the coupé. Bugatti used “La Voiture Noire1” – the black car – for brochure photos and as an exhibit at international trade fairs such as in Lyon and Nice. The coupé was lost in the turmoil of the Second World War and has been considered lost since 1938. His disappearance is one of the great mysteries of automotive history. Experts estimate the value of the Atlantic at more than 100 million euros - if it ever turns up again.

“More than 57 years ago, Jean Bugatti created one of the greatest masterpieces of automotive design with the Type 80 SC Atlantic. Hardly any other car exudes such elegance and presence,” says Christophe Piochon, President of Bugatti. “Like no other vehicle, the Type 57 SC Atlantic embodies the perfect symbiosis of automotive engineering and art. He is an ideal representative to represent our brand's heritage and design philosophy at the Guggenheim Museum Bilbao.”

Jean Bugatti, born in 1909, began modernizing Bugatti's model policy at the end of the 1920s with his passion and talent for automotive design. In 1936, at the age of only 26, he relieved his father of responsibility for the company. Instead of several models, he developed a basic model from which he derived various variants. Bugatti designed the Type 57 as a racing variant and as a series car - as the ultimate Grande Tourisme. These include different engine variants and body shapes such as Galibier (four-door sedan), Stelvio (convertible), Ventoux (two-door) and Atalante (coupé). Around 57 Type 1934 vehicles left the factory between 1940 and the end of production in 800 in the various versions – the exact number is not known. Only four Type 1936 SC Atlantics were built between 1938 and 57. Even then, the unusual body with the flowing shapes was striking. With a total length of only 3,70 meters, the bonnet stretches far forward, the rear end is shaped like an oval and flows far down until just above the ground.

Six thin tailpipes complete the rear area. A particularly striking design element is the upright crest that runs vertically from the hinge of the divisible bonnet to the rear end. Like a sharp fin, it divides the body in the middle. Rivets hold the split sheets in place. The Atlantic is powered by a smooth-running and powerful 3,3-liter in-line eight-cylinder engine with up to 200 hp, which is designed for a top speed of over 200 km/h - and that at a time when carriages were still on many roads were on the way. The exhibition “Motion. Cars, Art, Architecture runs through September 18, 2022

Share
previous DTM start: CUPRA in copper will lead the field in future!
Continue Gran Turismo and Forza Horizon 5: How close are these simulators to the real driving experience? 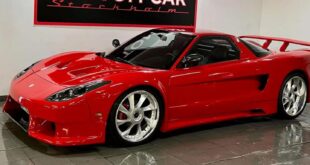