This bitter evil Dodge Charger widebody in black comes from the manufacturer Avant Garde Wheels, The company is known for its exclusive rims and especially when changes have been made to the vehicle, the result is often one-time, And that should also be the case with this vehicle. Because in addition to the beautiful wheelset, there were some other changes to the Ami. Incidentally, the Charger is a Charger facelift of the second generation LD, which was produced from 2010. But let's get to the wheelset. The type is installed AG F421 which we already have in the summer Pandem widebody Lexus RC F have seen. And also on the charger forged wheel installed in a two-tone combination. Specifically, there was a gray painted rim star and also a beautiful high-gloss gold drop center. And a look through the spokes reveals a new brake system. A system from Rotora is specially installed that, with huge perforated brake discs and light blue painted saddles, delays the charger as befits its status. And of course the color combination of the new Alus harmonises perfectly with the completely black body. It shows itself completely without chrome and is equipped with a lot of new body components. The most striking feature is of course the screwed on fender flares which make no secret about the way of attachment. There was also a large front spoiler, one Noname grille and even a huge hood with power domes and large air openings is installed. You can by means of quick release can be opened and locked and rounded off the evil front view with small ones Scheinwerferblenden, And something has also changed at the rear.

there are also changes at the rear of the charger The most striking feature here is definitely the ducktail spoiler lip, but also the modified rear diffuser and the darkened light strip make a difference to the series. And then of course there is the extreme lowering. The charger was hit so extremely on the street that actually only one Airride air suspension can be responsible for it. Unfortunately, exact information is missing. The same applies to the exact dimensions of the rims, the apparently changed exhaust system or also in terms of engine performance. However, we hope that the missing information will reach us in a timely manner. If so, there is of course an update for this report. You will be informed if you simply use ours Feed subscribe to. Have fun watching the pictures and stay true to us! 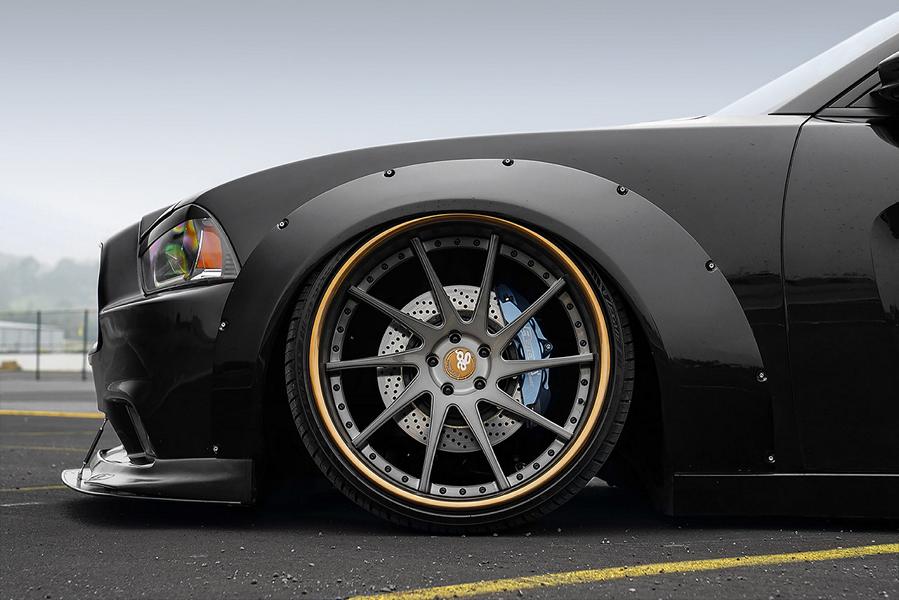 Of course that had not been the case. Our tuning magazine has tens of thousands more tuning reports in stock. Do you want to see them all? Just click HERE and look around. Or are you particularly interested in the Avant Garde Wheels rim label? Then the following excerpt is exactly the right thing.