Supercars and Hypercars make the hearts of most car fans beat faster. These vehicles that mostly limited are, and come from very special manufacturers, are the spearheads of automotive engineering. Often they only offer space for two people, but the incomparable prestige and sportiness ensure that these automobiles mature into absolute collector's items. Of course, the up-and-coming China does not spoil it, and brings with it Hongqi S9 a hypercar that can measure up to the European competition from Bugatti, Mercedes-AMG and Koenigsegg. Hypercars are usually unaffordable for mere mortals, but that doesn't stop manufacturers from bringing such toys onto the market for the super-rich.

The design of the new Hongqi S9 is of course spectacular. The front section of the new super sports car from China is somewhat reminiscent of a Corvette C8, but is wider, flatter and a little more martial than the US sports car. The headlights are relatively large by today's standards, with a trapezoidal shape, but also the Air inlets for cooling the engine houses. At the front there is also the multi-level trunk lid with various air inlets to ensure that there is always enough cooling air in the engine compartment. Yes, the admittedly small trunk of the Hongqi S9 is in the front. But that's how it should be for a real hypercar that the engine is placed behind the rear axle. 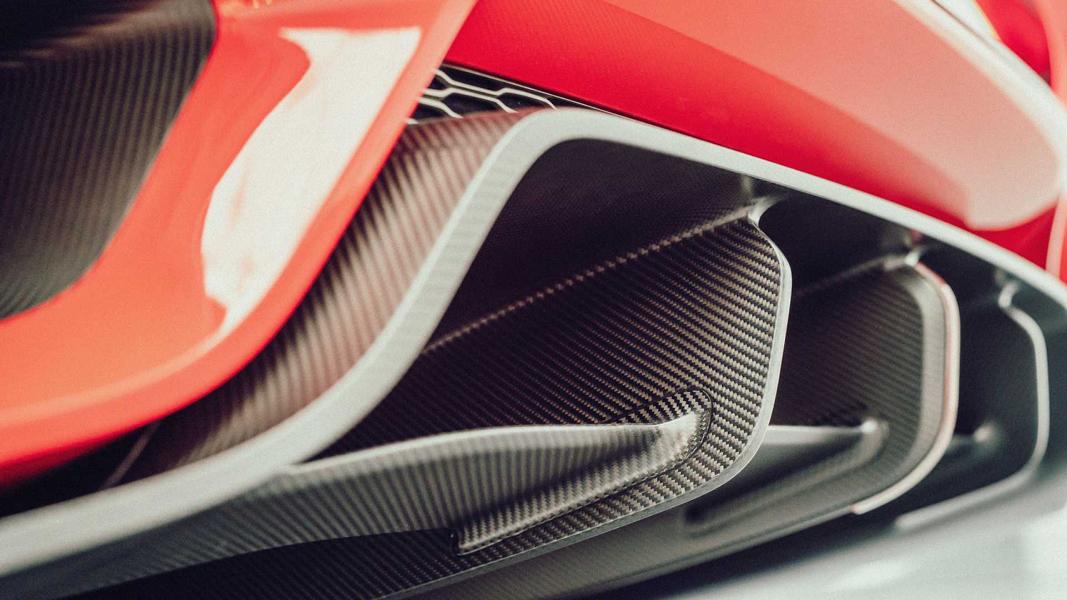 The single-armed wipers, which lingers in the middle of the resting position, gives the Hongqi the impression of a Le Mans racer and is reminiscent of good old tuning days. On the side, the hypercar profile is very clear, as the flat silhouette with the large glass surfaces in the front part looks like a racing car. That is also very pronounced Red stripes, which serves as the Hongqi brand logo and was placed in the middle of the front. A design element from the early 1990s is clearly visible at the rear, namely the cats stairswhich allows the overview to go backwards towards zero and also on the new Ferrari 812 "Versione Speciale" can be found. The rims are partially covered in order to offer the lowest possible air resistance when it is in the direction of the targeted Top speed of 400 km / h should go. 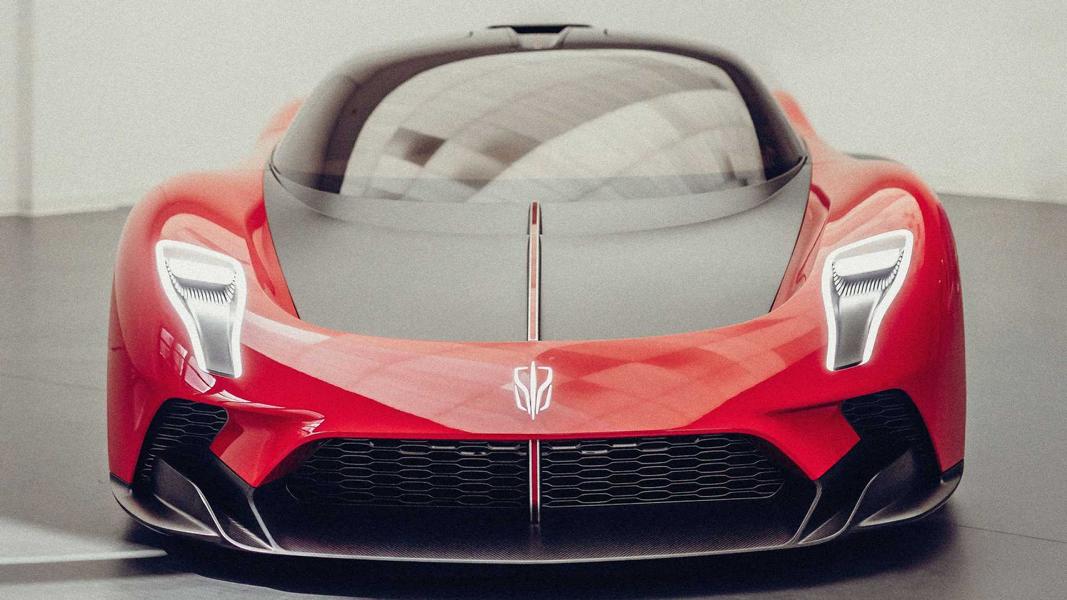 The tail lights and various elements of the rear end are kept in black, which gives them the color of the sidebladesthat are somewhat reminiscent of an Audi R8. The rear spoiler Unfortunately, in our opinion it looks a bit like a relic from bygone times, but we think that it has its function when it comes to generating as much downforce as possible. A active rear spoiler solution, which extends automatically at high speeds, would have been more discreet. Nevertheless, the whole vehicle looks like a real hypercar that doesn't have to hide from any Bugatti or Koenigsegg.

The interior is like a mixture of a Formula 1 car and a current McLaren sports car. Most likely there is not much space in the narrow, tailor-made cockpit of the hypercar, but the very modern layout with the monitor and the Alcantara sports steering wheel compensates for the poor space available. 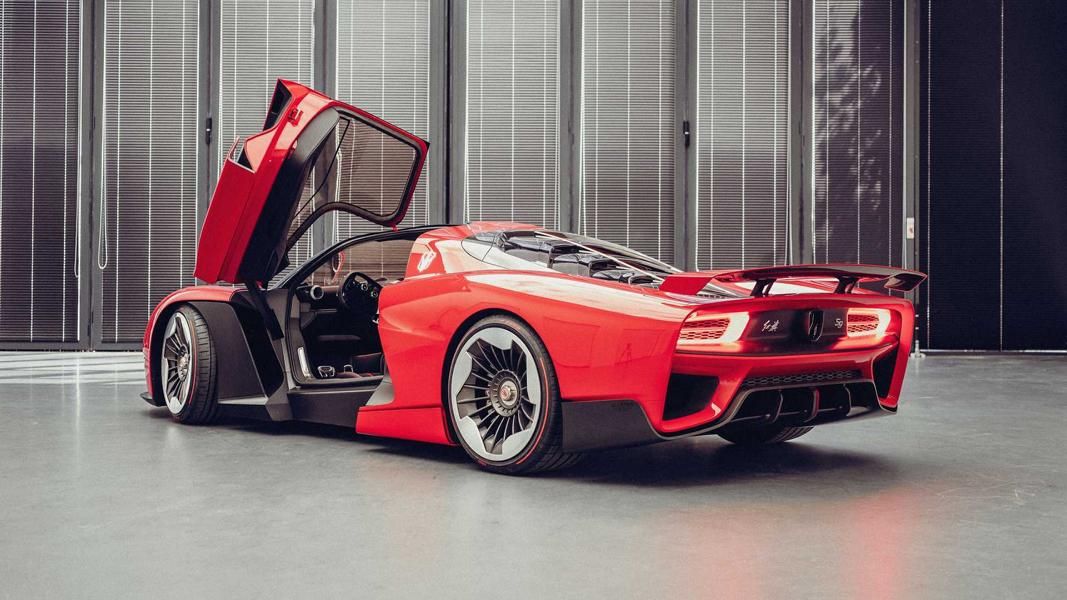 A V8 turbo gasoline engine, which was probably designed as a plug-in hybrid, and breathtaking from 1.400 HP provides propulsion in the new Hongqi. The performance should be out of this world, and the sound barrier of 100 km / h should be incredible 1,9 seconds be broken. Up to a maximum speed of at least 400 km/h it should work, but unfortunately we don't know more details yet. So the S9 should really heat up veritable hypercars from Bugatti or Koenigsegg when it comes to a limited small series of 99 pieces rolls onto the streets of China.

Our conclusion on the Hongqi S9:

It is impressive what the traditional luxury brand Hongqi, which normally offers representative sedans and SUV models, has put on its wheels here. Of course, the 99 copies built will be for over 1,5 million euros only go to a particularly solvent clientele, which means that the Hongqi might find itself in a garage with another hypercar competitor. If you like the racer, you can take a look at the appropriate picture gallery that we have attached to the article. If we get more information about the changes, there will of course be an update for this report. You will be informed of this if you simply use ours Feed subscribe to. Have fun watching the pictures and stay true to us!

Don't worry, of course that was far from being the case when it came to auto / auto tuning. Our magazine still has tens of thousands other tuning reports in stock. Do you want to see them all? Then just click HERE and look around. Or are you particularly interested in everything to do with the manufacturer Hongqi? Then the following excerpt with other vehicles is definitely the right one.