And once again the in-house McLaren tuning department shows us MSO (McLaren Special Operations) a very special specimen. And that unofficial little brother from the end of 2020 McLaren Elva with Gulf Theme. As is well known, McLaren and Gulf Oil can look back on great times in motorsport and they want to celebrate that too. And that's why it's possible to have a limited number to McLaren 720S athletes with an official MSO Gulf theme paintwork to order. The limited edition, like the Gulf-Elva linked at the beginning, was created due to a renewed cooperation between the two companies last summer. And where Gulf it is, there is also Gulf drin. Because all vehicles come with the factory Gulf oil and fuels filled. Gulf and the manufacturer McLaren had been partners from 1968 to 1973 and into the 90s and together they wrote an extensive racing history.

There's a lot of Gulf style inside and out

For example at the famous 24 Hours of Le Mans in 1997. You won the McLaren F1 GTR (BMW S70 6.0L V12) and with the drivers Jean-Marc Gounon, Pierre-Henri Raphanel and Not so Olofsson with the Gulf Team Davidoff behind the TWR-Porsche WSC-95 the second and third (Vehicle number 2 with Peter Kox, Roberto Ravaglia, Eric Hélary) Place.

And the very special paintwork of the 720S, which was carried out by MSO and completely in manual work is applied. The Gulf war paint, legendary for decades, takes 20 days to finalize on a 720S and was done with the Dutch paint specialist AkzoNobel developed. There is also an all-round vinyl dress Brake calipers in Gulf full orange, ones have a PinStripe on the rims and even one custom-made interior with blue and orange seams and with Gulf logos on the headrests in the human body and facts about the Side sill. Even at a Gulf steering wheel one thought. Only the power of the 720S with its 4-liter bi-turbo V8 is left in the series status. That means it continues to worry stately from 720 HP and 700 NM torque for a brilliant 2,9 seconds sprint from 0 to 100 km / h and the top speed is insane 341 km/h. What the Gulf update will cost has not yet been officially determined. It is clear that the Gulf paint has to cling to the body at the speeds of the 720S. PS: next weekend that will Formula 1 car MCL35M be seen in the legendary Gulff colors at the Monaco Grand Prix and for the first time in F1 history wear a matte finish. If we get more information about the changes, there is of course an update for this report. You will be informed of this if you simply use ours Feed subscribe to. Have fun watching the pictures and stay true to us! Don't worry, of course that was far from being the case when it came to auto / auto tuning. Our magazine still has tens of thousands other tuning reports in stock. Do you want to see them all? Then just click HERE and look around. Or are you particularly interested in the in-house MSO tuning department from the British manufacturer McLaren? Then the following excerpt with other vehicles is definitely the right one. 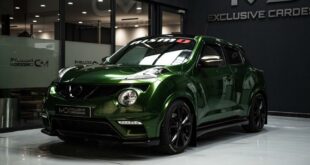