Have you ever heard of the Japanese tuner? OIRAM heard? The company also operates a subsidiary in the USA and has been offering an extreme widebody kit for the current Subaru Impreza and the top model WRX Sti for some time. Oiram has already been able to sell a large number of the body kits and we would now like to present this body kit to you using the example of a completely converted STi. If we are correct, the vehicle is even the official presentation vehicle from OIRAM (built by LTMotorwerks) and it is modified accordingly. But of course let's start with the highlight - the body kit! It includes the large spoiler lip for the front bumper, optional canards and, of course, the huge fender flares all around. 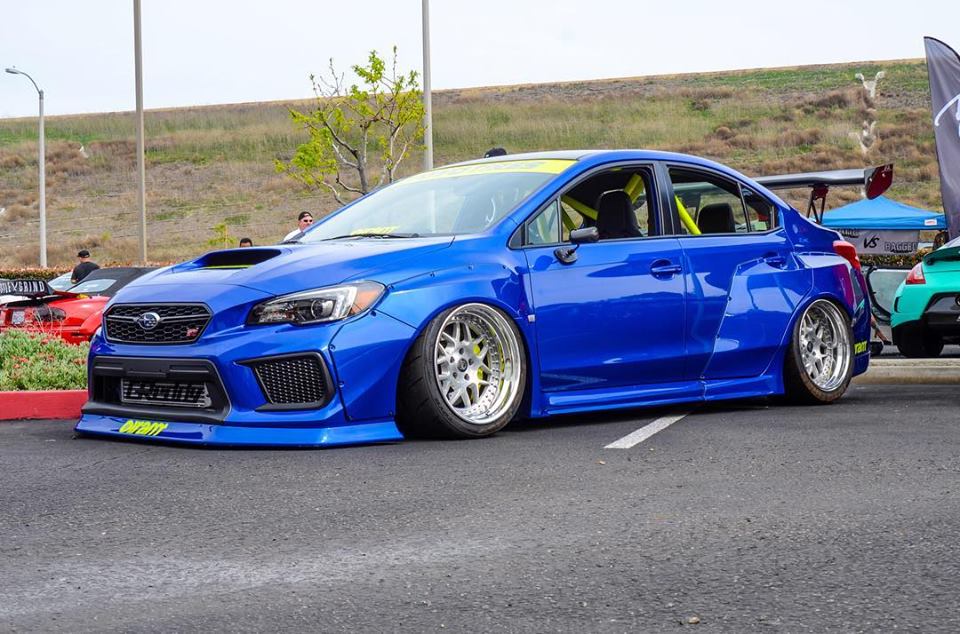 Similar to the components of Liberty Walk These widenings are also provided with open fittings and especially in view of the rally ambitions of the WRX Sti that is visually absolutely fitting as we find. The widenings are particularly large and take almost the entire front fender. They also have large air openings in the door area. But even more powerful are the essays for the rear side walls. They also enclose well 60% of the rear doors and the side walls almost completely. Again, exposed fittings are provided for the attachment of the components. And also the diffuser attachment on the rear bumper comes from Oiram and an optional Ducktail spoiler lip can be ordered. The presentation vehicle, however, was provided with a huge APR rear wing which was somehow exactly the right decision as we find. And what would such a project without lowering and new alloy wheels? The WRX got both of course and regarding the landing gear it had to be an Airride-Air Suspension. Specifically, you installed an airlift performance air suspension that the Japanese from now on at the touch of a button and up. And the drop center rims come from the shelf of Forgestar. Installed is a two-piece silver-painted rim from Forgestar. Specifically, it is the M14 type in an estimated 19 inches and with Toyo tires. On some pictures in our gallery, however, the WRX can also be seen on other rims. Of course, the STi has received a lot of further modifications. On display is a sports exhaust system with blue-burned tailpipes, a bright yellow painted roll cage in the interior and in some pictures also Recaro sports seats and other details. Unfortunately, aside from the body kit, we have little information about the car. Unfortunately, we are currently unable to provide any details on the engine performance. The GReddy intercooler can be in any case to conclude that here more power under the hood is available as the production vehicle. We hope that we will get some information soon. If this is the case, there is of course as always an update for this report. It is best to subscribe to our feed and if there is something new you will get in touch immediately. PS. Incidentally, Oiram also has a body kit for the predecessor built from 2008 to 2014. Again, the result is extremely powerful and at least as chic. You can find pictures of the Subaru GV WRX Bodykit HERE.

Here are the details of the LTMW OIRAM Widebody WRX STI: We still have many thousands more tuning reports on tuningblog.eu, if you wanted to see an excerpt then just click HERE, And tuned WRX STi we have even more, following a small excerpt: