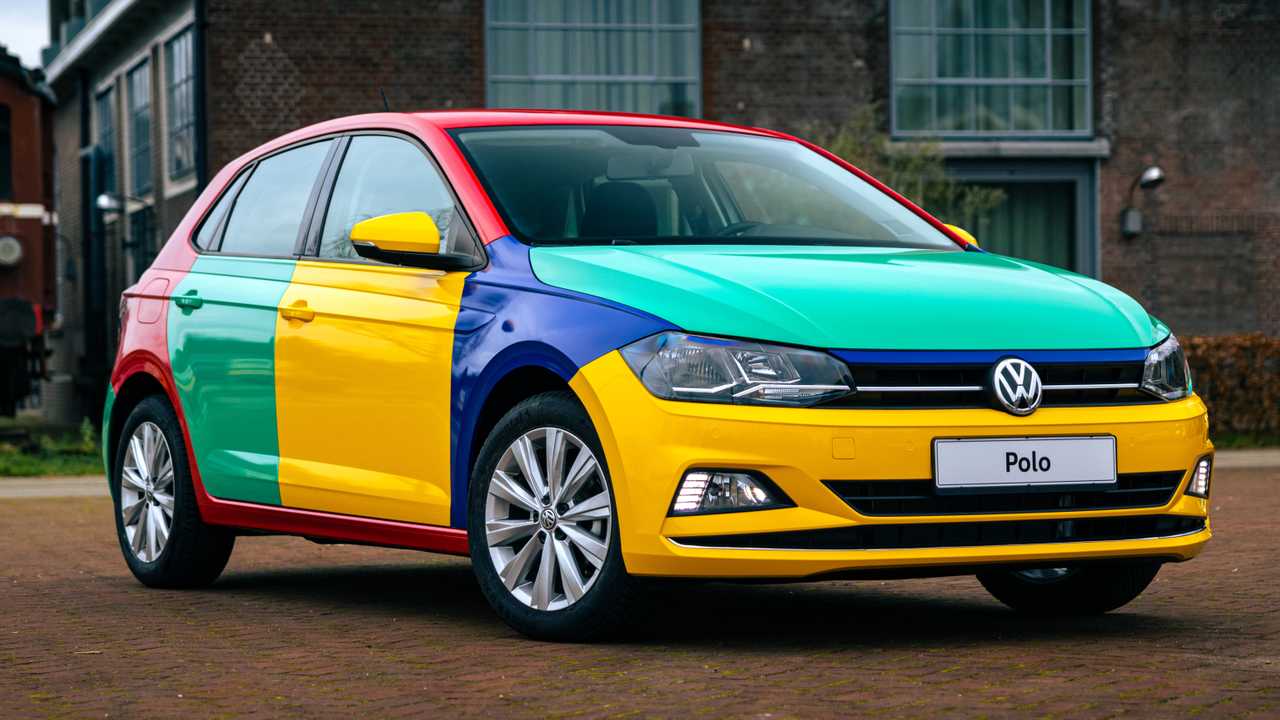 Who doesn't know what is probably the most colorful VW? ex works has ever existed: in 1995 there was VW Polo Harlequin (6N) to buy. And that was progress in many ways. It was the first Polo with rear doors, airbags, seat belt tensioners and ABS. And there was the so-called "Modular system". With the four building blocks Drive, equipment, options and Colour it was easy to put together a polo according to your own wishes and preferences. So that the principle of the building blocks could be visually recognized, VW had one Color code developed. Yellow stood for the equipment, blue for the engine and the chassis, green for the paint colors and red for the options. And so that the color codes could be internalized, VW presented 20 harlequin polos at dealer events for advertising purposes out. But customers insisted on the colorful Polo too buy, VW expected can not be . But Volkswagen took customer demand seriously and started producing in 1995 1.000 four-color polo shirts with name Harlequin. And the construction was less complicated than you might think. VW built four normal polos in for a harlequin Blue, red, yellow and Mint green and then swapped the body panels like Tailgate, doors, hood, bumpers and Mirrors according to a fixed pattern. If you wanted that primary color then you just had to know that roof, the sill or engine compartment appraise. By the way, the Harlequin always has the front bumper, front doors and mirrors same color. And that goes for them too rear doors and the rear bumper. And a nice surprise was the fact none To be able to order basic color. You had to wait to see which of the four color combinations you got. Incidentally, that too Interieur the harlequin wasn't boring black or gray. It was colorful due to the "Joker" upholstery with the come Primary colors. There was a blue leather sports steering wheel and an Harlequin logo was on that shift knob to see. In addition a radio from "Blaupunkt" and as a badge there was a Harlequin logo on Hatchback. And the first 1.000 vehicles were even numbered with a key ring and a Certificate delivered. VW built a total of 3.806 copies of the Harlequin. And what is a little less known: from 1996 it was the then Golf in the US also as Harlequin available with a similar color scheme. 246 vehicles of which were built in the Mexican plant in Puebla. And now remembered VW Netherlands to the moving Polo paint bucket. However, it looks - As of today - can not be suggests that the current generation will also be sold over 3.800 times and will be an unexpected success for Volkswagen.

The vehicle is (so far) a Single copy in the sense of Tribute. The principle was implemented in the style of the predecessor and a vehicle in Red elected. However, there is in the interior, apart from one Harlequin figure, none color accents as in the predecessor. And there is also a Harlequin lettering on the tailgate can not be upset. If we get more information about the changes, there is of course an update for this report. You will be informed of this if you simply use ours Feed subscribe to. Have fun watching the pictures and stay true to us! Of course, that wasn't the end of it. Our tuning magazine has tens of thousands more tuning reports in stock. Do you want to see them all? Just click HERE and look around. Or are you particularly interested in the Volkswagen brand? Then the following excerpt is definitely just the thing.

VW Polo Harlequin (2021) from the Netherlands!