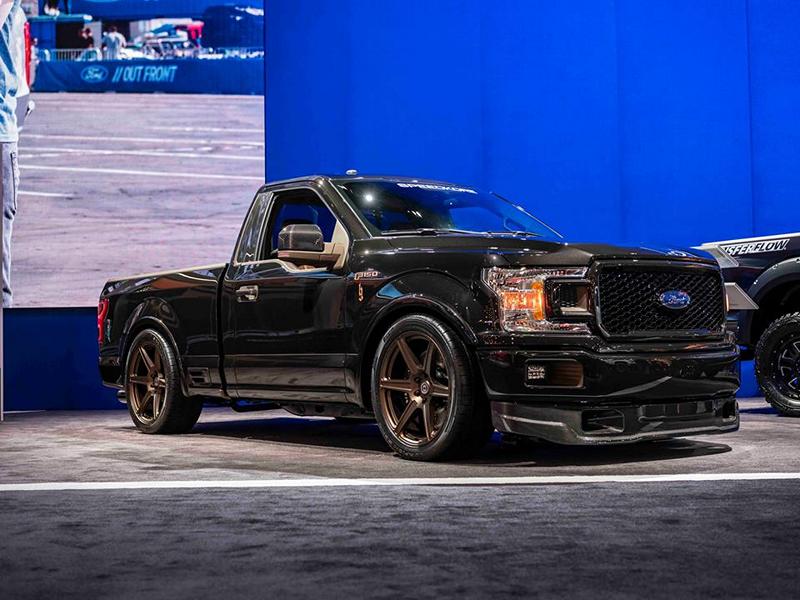 Here comes the 2018 Ford F-150 XLT 4 4 × 2 Regular Cab, 5'5 "Bed" Ultra-Performance Pro-Touring Edition " from the SpeedKore Performance Group! And as is customary with SpeedKore, the material was also used in this project Carbon in the centre. By the way, the vehicle belongs to the US country pop singer Brantley gilbert and stood at the last SEMA Auto Show. The basis is a brand new F-150 which is actually made specifically for off-road use. However, due to the significant lowering, this example is likely to be just as out of place off paved slopes as a Ferrari, Lamborghini, Porsche & Co. 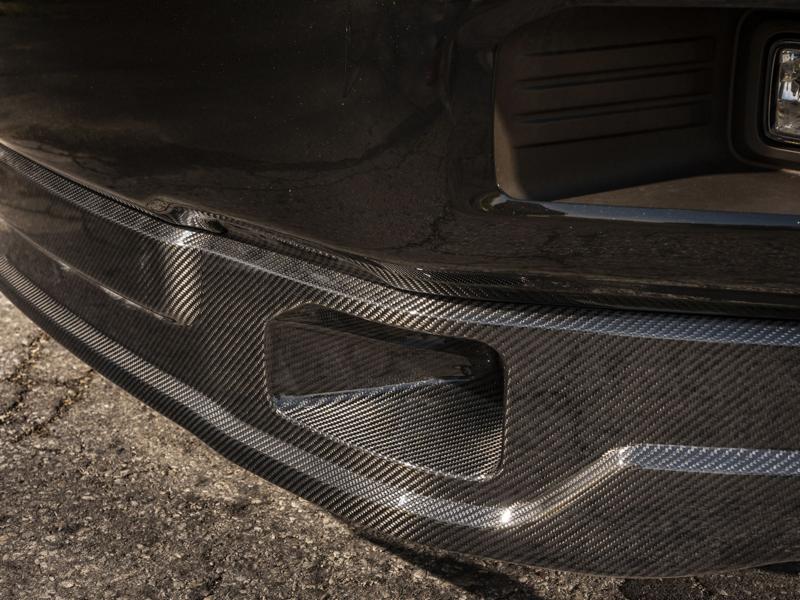 The highlight, of course, are the countless carbon fiber details on the F-150. In front you developed a large front spoiler that ensures that the F-150 even looks a little sporty. Also, the mirror caps are held in fine carbon look and of course a custom-made. Even the smallest details such as the door handles, the handle for the tailgate or the tailpipes of the sports exhaust system wear sporty carbon fiber. Incidentally, the parts are all made in the in-house SpeedKore autoclave and coated several times with clear lacquer and are therefore not from any third party. Incidentally, the F150 also got the illuminated SpeedKore symbols as we have already seen from the Hellcat conversion (Gallery below) of the company.

Tailgate with carbon insert and lettering 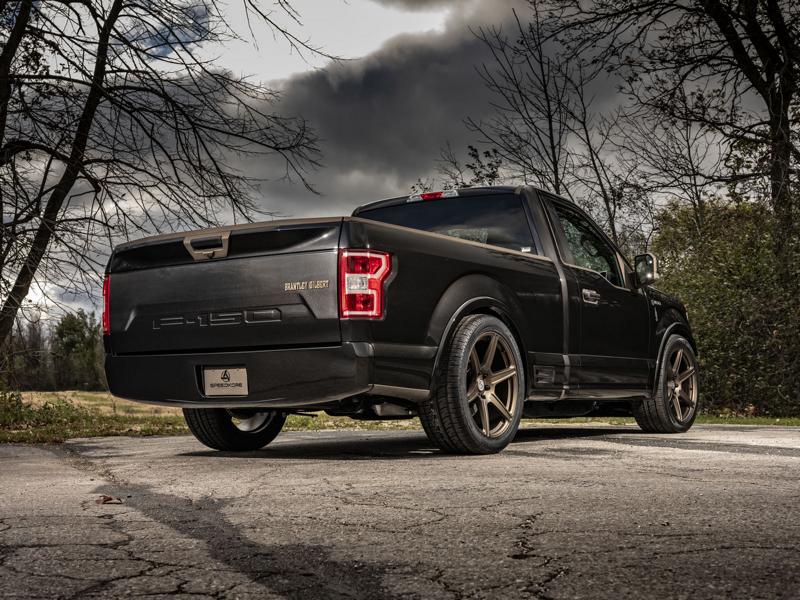 The tailgate with carbon inlay still received the lettering of the singer and beyond the rear apron is completely painted in body color. Other Brantley logos are available on the doors and in the interior. And under the bonnet, something befitting has done. Here, they install a Ford Performance / Roush compressor kit, a cold-air intake, and connect the 5,0-liter V8 to a Ford Performance exhaust system. Result? from 700 HP! And so that the huge load can be braked again there was a Brembo brake system with BM-8 eight-piston calipers and 16,2-inch front discs and four-piston GT calipers with 15-inch brake discs on the rear axle. 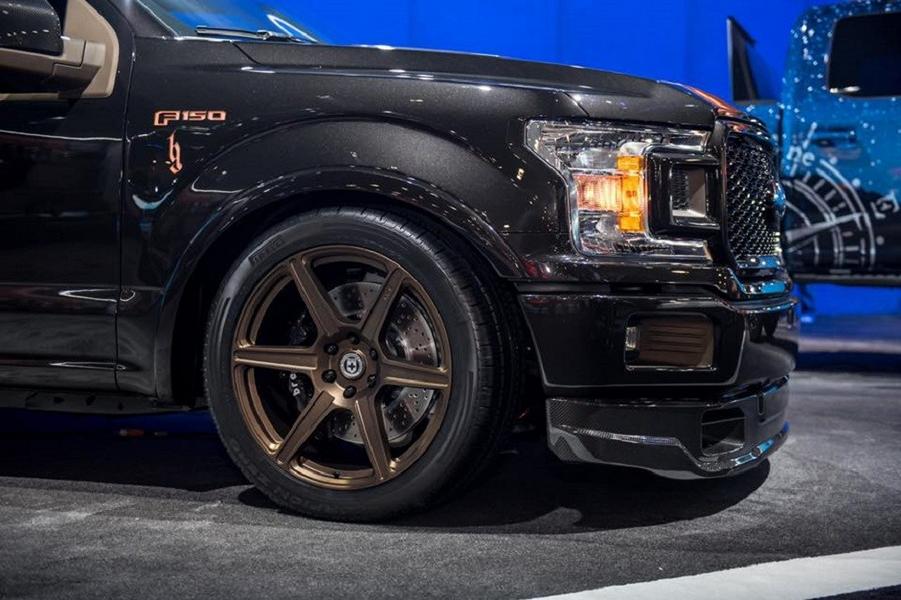 And as already mentioned, the large pickup is also significantly lower. Here the tuner installs a MaxTrac lowering kit, among other things, ensuring that the F150 goes down a good 5 inches on the front axle and the rear axle is even lowered almost 7 inches. And of course there was also a new set of wheels. 22 × 10 inch monoblock forged wheels of the type TR105 from the shelf of HRE performance wheels, The wheel set comes with a metallic bronze paint finish and blends in perfectly with the many bronze accents that are added to the bodywork. And as mentioned above, the interior has changed, and not too short. 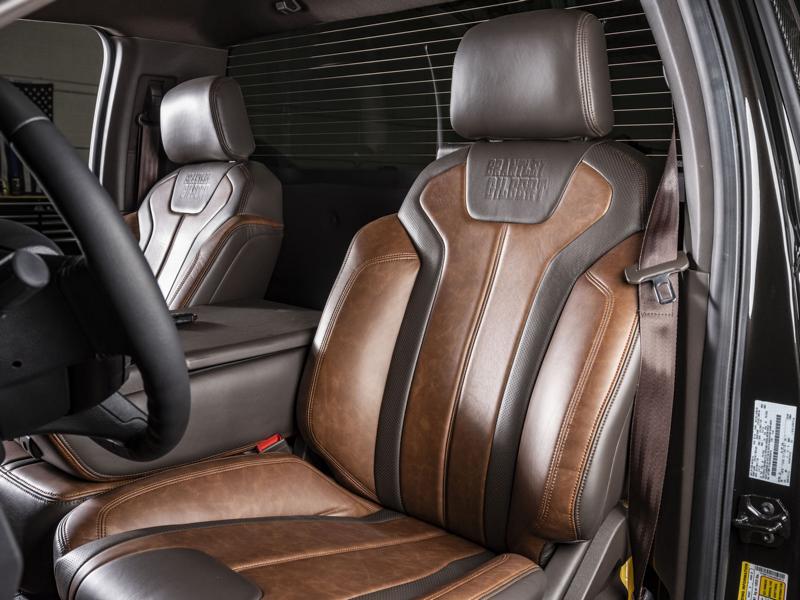 There was a completely new leather interior in elegant coffee brown and dark brown which even extends to the custom-made child seat. The leather can also be found in the door panels and makes the interior of the F-150 significantly more valuable than the factory is the case. Once again, the guys from SpeedKore have shown what they are capable of and an absolute unique piece of work. If we receive timely information on other changes not mentioned before, there is of course as always an update for this report. It is best to subscribe to our feed and if there is something new you will get in touch immediately. We wish you a lot of fun watching the pictures.

Had a blast working with SpeedKore Performance Group on this truck .... Outstanding Achievement in Design from Ford Motor Company .... Hell ya ....

These are the details of the Ford F-150:

We still have many thousands more tuning reports on tuningblog.eu, if you wanted to see an excerpt then just click HERE. And we also have a lot more cars from the SpeedKore Performance Group, the following is a small excerpt: